American sculptor Michelle Jaffé creates participatory installations that manifest as sculpture, sound and performative video. Immersed in a visual and sonic environment, these encounters provide participants with an opportunity to create a synaptic shift in attitude and experience, where new neural connections can be forged.

Jaffé explores how individual psychology and pathology are mirrored in society.  When and where are the borders between terror, abuse and negligence blurred and crossed?  She asks what is shut in, what is shut out? 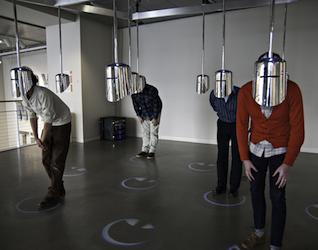 For Jaffé's iconic work Wappen Field, chrome plated steel, LED’s, vocal composition and SuperCollider are deployed to create an enveloping installation. Poet Douglas Crase has said “Whether in the immersive dimensions of Wappen Field or the exquisite chamber
work Awakening, (an experiential light and soundscape of Walter De Maria’s Lightning Field), she has opened apertures on the sublime which render it visible, audible, and imminent.”

Jaffé shares a sensibility for scale with Jackson Pollock and Richard Serra, as well as a sense for the comedic, a biting edginess and the theatrical with Oskar Schlemmer, Robert Wilson and Pina Bausch. 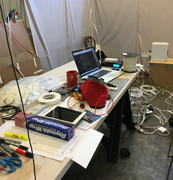 Educated as an American teenager in London, Jaffé earned a BA Honours in Fine Arts & French Literature from the University of East Anglia in England. Childhood exposure to Asian art formed her visual sensibility. Eastern depictions of space and their evocation of so much with such economy, informs her work’s formal clarity.
She has exhibited at The New Media Gallery, Vancouver, Duke University, NYCEMF, Beall Center for Art + Technology, WhiteBox, Milton Art Bank, Transylvania University, Indiana University, UICA and solo shows in NY at Bosi Contemporary, Wald & Po Kim Foundation, Susan Berko-Conde Gallery & Brooklyn College. She has been awarded residencies at The Newlyn Gallery and Exchange Museum-UK, MacDowell Colony and Djerassi, and grants from NYSCA and Queens Arts Council. Jaffé's design work is extensively collected by the Philadelphia Museum of Art, Museum at FIT and Museé de la Mode in Paris.